Environmental restoration is a multibillion-dollar business. In her book “Beaverland: How One Weird Rodent Made America,” Leilla Philip explores how the rodents can provide crucial ecosystem services, for free.

“Are you ready to open the closet and enter Narnia?”

Scott McGill stands at the edge of Long Green Creek in the Chesapeake watershed. I can hear rustling and chirping, then the loud, regal cry of a hawk.

McGill is the founder of a visionary environmental restoration company called Ecotone, based in Forest Park, Maryland. A slim man dressed in jeans and a green T-shirt, he exudes enthusiasm and confidence. McGill gives a quick nod then disappears into a thicket of willows.

I am only a few steps behind, but the underbrush swallows him so completely that for a moment I can follow only by listening for the sloshing sounds of his boots plunging forward through water. His wife, Moira, relaxed and cheerful, brings up the rear.

Narnia is what McGill calls the wetland area that beavers have created here by damming the creek that runs through Long Green Farm, fifteen miles north of Baltimore. As soon as I step into the wetland, the landscape changes so dramatically, it feels as if I might just have slipped through the enchanted wardrobe in C. S. Lewis’s famous series. While just a moment ago we were standing on a farm road, flanked on either side by wide fields of soybeans and hay, we are now moving through an iconic forest wetland.

The air has cooled and before us the ground is silvered with water. Somewhere near the center and down deep in this swampy expanse, Long Green Creek is running through, but you wouldn’t know it unless you hiked to the far end and saw the dam that the beavers have built there. Spires of dead trees punctuate the scene, which is teeming with birds. Meanwhile, everywhere I look I see an extraordinary variety of grasses, sedge, and aquatic vegetation. McGill turns around and grins. I am glad I wore my waders, because the water is way above my knees. Once they entered the wardrobe, that famous portal to Narnia, the kids met Mr. and Mrs. Beaver, who stood on two legs and spoke to the children, becoming their guides. The beavers we are looking for here moved in six years ago. McGill looks admiringly across the water. “When I walk in here it’s another world.”

McGill is proud to be known in the environmental restoration industry as the “beaver whisperer.” He’s evangelical in his belief that beavers can help solve environmental problems. He thinks it is a tragedy that they are part of our history, but not part of our culture. Here in the Chesapeake watershed, in Maryland, Pennsylvania, and New Jersey where he does most of his work, he has been striving since 2016 to help shift the culture around beavers and stream restoration by showcasing what he calls the “ecosystem services” of beavers. Let the rodents do the work is one of his mottos.

He believes it is possible to “reseed” the East Coast landscape with beaver, and he has done enough restoration work with them now to prove that these efforts work and can make a difference, saving his clients, which include individual landowners, farmers, towns, and municipalities, a great deal of money. Environmental restoration is now a multibillion- dollar business throughout the United States, but especially in Maryland where in part due to the incredible rate of development, every county is now under pressure from the Environmental Protection Agency to help clean the water running into the Chesapeake Bay.

Spanning sixty- four thousand square miles, the Chesapeake is the largest watershed on the Atlantic seaboard, intersected by over a hundred rivers and thousands of creeks. And every drop of rain that falls in the watershed—an area that covers almost one- sixth of the East Coast—finds its way into the Chesapeake Bay. Because this area extends over six states, all of which have been transformed by intensive development—the area is now home to some eighteen million people—the Chesapeake Bay is more affected by land use than almost any comparable body of water on earth. Five years ago, the EPA issued warnings that counties that lay within the watershed had to act.

I loved this idea that beavers, these wonderfully weird animals that in so many ways had made America a country, could now play a role in helping to save the land itself. All up and down the Atlantic seaboard, if you looked, you could find beavers at work. And when they were left alone for long enough, within decades they could reshape the ways water moved through the land, bringing back the rich biodiversity of paleo- rivers. But those areas were for the most part open land, or tracts of forest set aside for scientific study and conservation. Could beavers be used successfully for large- scale stream restoration and floodwater control in places full of people? McGill had suggested I start my visit here on Long Green Creek because he considers it a “poster child” for how beavers have been put to work.

After we have finished our tour of the extensive wetlands the beavers have made and are once again standing on the farm road, McGill points back to where the beavers are living.

“To build a storm water management pond with that kind of water retention would cost one to two million dollars,” he says matter-of-factly. I am visibly stunned at the price. “One to two million?”

“Yes,” answers McGill. “You have to build the embankment, the core, an outlet structure, you have to design and plan the whole thing. We’ve built those; we have contracts with counties throughout Maryland where it is one after the other. But beavers did all this . . .” He swings his arm in a wide gesture for emphasis. Moira, who has been listening, interjects with a grin, “For zero dollars!” She laughs, and so does McGill, both of them energized and delighted by this thought.

If he is worried about losing business because beavers can create storm-water retention ponds for about a million dollars cheaper than his company can, McGill does not show it.

“We do stormwater management, construction, renovation, fire retention areas, we do a lot of stream wetland restoration,” he continues, “but the thing is the water quality benefits of a beaver pond are very much similar to what we want to see in an engineered storm management pond.”

Once he is on the subject of the economic savings of utilizing beavers, McGill has no limit of case studies to share. He begins to describe some restoration work Ecotone did on a tidal creek twenty years ago. “The county and state were spending millions dredging it every ten years,” he explains. When the town called up to ask McGill to do something about some beavers that had moved in, McGill convinced them to put in a flow device instead of removing them. The flow device cost about $8,000 to install and monitor, but McGill figures that the ecosystem services that the beavers there provide is probably worth millions.

“We try to take the approach where we coexist,” he continues. “We say, ‘Let’s let the beaver stay and get the ecosystem benefits they provide.’ The creation of water storage and sediment storage—the cost-benefit ratio of using beavers is astronomical.” 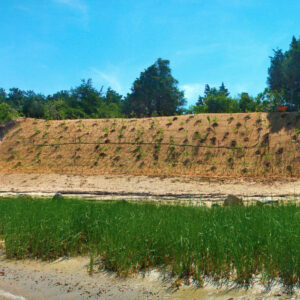 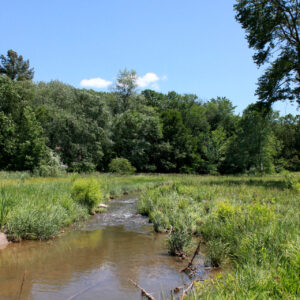